Ready to Build a React Native Mobile App that will fuel your business growth?We have a team of certified developers who can help you plan, strategize, design and develop a React Native mobile app at speed.

Choose the Best Suited Services
from Our Varied Catalogue

We have a highly specialized React Native app development team equipped with state of the art hardware and software support. Therefore, enabling them to leverage their consulting and strategic capabilities, technical prowess and domain expertise to create React Native app solutions that are future ready.

As one of the leading React Native app development companies, we understand that your ideas are the core of your dream apps. And so we are all up for hearing them.

In order to lay out a concrete plan for building a native Android mobile app, our team streamlines all your development needs into a digital strategy for your product.From design and development to testing and quality assurance, we are your partners in the full-cycle of react native app development process.

With expertise across a wide range of technologies, our dedicated developers can help you migrate your app from current technology stack to React Native.

Our React Native app development services come with the added support and maintenance for up to 30 days, post launch.

Need an expert for a brainstorming session while sipping a cup of coffee? 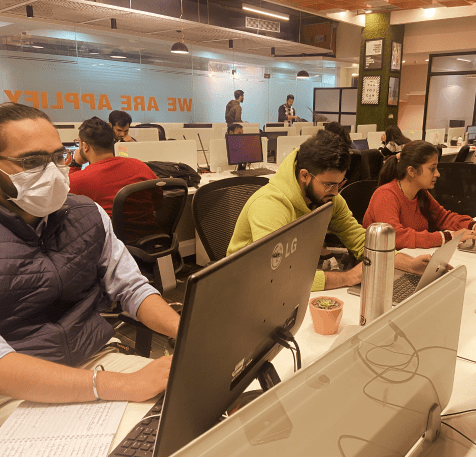 Our tools and technologies are well-researched and time-tested to give you an extra edge over your competitors.

Hire Our Team To Grow, Sustain and Flourish Your Business

React Native has been making the rounds as the “next big thing” in the app development industry. We at Applify know the value of robustness and ease while developing an app. Thanks to React Native, and the budget-effectiveness it offers, it’s been a total game changer.

We have a top-notch team of exceptionally skilled and diversified developers who have a great understanding of React Native and work efficiently to provide designs to help you reach your goals!

Your dream app is just as important to us. User Experience, app performance, and a bug free application have always been on the top of our priority list while developing an application so that you get just what you need.

We excel in delivering applications that are of high quality within low development time and efforts. We have a verified portfolio of strategies and approaches that have helped us deploy a number of innovative applications globally.

If you’re looking for React Native mobile app development services we are your holy grail.

Talk to Our Experts

React Native Is The Best Choice For Your Dream App

Our React Native app development services are not just limited to cost effectiveness. There’s more to it. React Native makes for a better app in more than one way. We engineer our mobile app development process in such a way that is bound to give you a quality experience while also maintaining a smooth application.

React Native lets the developers create multi-platform code which is also the biggest time saver when it comes to app development.

React Native is an open-source mobile application framework which gives the developers an independence to create an app.

React Native codes are reusable that frees the developers from the hassle of writing new codes again and again.

Let Us Build That
Perfect Mobile App
For You.

We have a team of the finest React Native app developers. We are innovative and serving you with the best user experience has always been our main priority. From planning to deployment, we will take care of everything

GET A FREE QUOTE

Choose From Our Top Engagement Models

We have designed customized plans that are best suited for your project
specifications and business goals.

Ideal for businesses with a growing or flexible scope of digital product development. TeamX gives you the ability to build elastic and remote tech teams with a “10x” increase in productivity and up to 50% lower hiring expenses.

For designing your product idea

Ideal for individuals ready to start their entrepreneurial journey with a product design. StartX increases the odds of getting preseed funding by “5x” with a UI design, UX research, clickable prototype and pitch deck.

Start a Partnership with Us!

Let’s work on your dream application together. With our React Native services you can grab great deals and we will take care of the whole process.So look no further. Get your consultation and ideation sessions in line. Our experts are all set to help you at every point of this journey.

Why is React Native so popular?

One of the main reasons behind React Native’s popularity can be stated as its ability to build cross platform apps. It lets you reuse your once written code on various platforms natively. Back in 2015 when Facebook launched this framework, it was amongst the few cross-platform app development platforms available at the time. But over the course of time, multiple features have been included to it, making it a preferred choice. Some other reasons to choose this platform:

Why go for React Native for your next project?

React Native is a cross platform app development framework. It paves way for a faster development process enabling the developers to use the same codebase for both iOS and Android apps. Apart from that it also makes the future updates and maintenance easier. Also, you can add new technology or app features to the codebase easily and without repetition.

How long does the React Native App development process take?

The development process depends on the nature of your application. Although with React Native you can cut short the development time as it relieves you from the hassle of writing new codes for different platforms. You can simultaneously create Android and iOS apps.

What are the famous apps that use React Native?

React Native has been used to develop some of the most popular apps in the world. Facebook, Instagram, UberEats, One Drive, Pinterest, Walmart, SoundCloud, and Airbnb are some of the major apps that use React Native.

Can React Native be used for web app development as well?

With React Native, developers can amalgamate a React Native app into a single codebase with the help of React Native Web. This eliminates the need to develop and manage two different codebases for mobile as well as web. Since there is no effect on the app performance, the apps will run smoothly on mobile and web.