How to Know if Your App Developer is Overcharging You

How to Know if Your App Developer is Overcharging You

One of the most common questions that clients ask while pitching us their idea is:

How much will the app cost?

Their biggest concern is that they might get ripped off – which is reasonable.

If I were in their place, I would’ve done the same. Perhaps, you as well.

Many people end up spending more than they should on an app because they’re not aware.

You would surely not want to become the next entry in the list.

Hence, it’s important to know when app developers are trying to burn a hole in your pocket and you need to escape from their claws.

But the question is:

Well, that’s why I am here. I will guide you through the whole process.

Although, first you need to know:

How is the app development cost decided?

The app budget is quoted on the basis of the following factors according to our expert app development team in Singapore:

So, if you’re planning to hire an established app development team, you will have to loosen up your budget.

Developing an Android app is a little less costly than an iOS app.

Apart from this, the development cost also differs according to the location where you want to outsource your project. 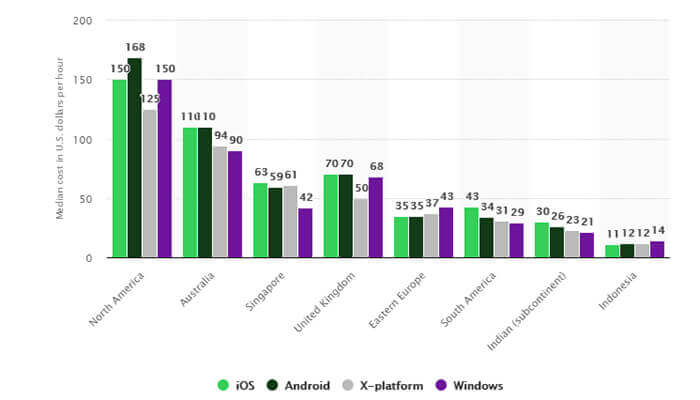 App cost goes up with every added feature. As a result, longer the list of features your app has, higher will be its cost.

5. The number of screens

Each new app screen means that the design and development team will have to spend more time creating user experiences and implementing them within the app.

So, cost of an app increases with the number of screens.

While there are some companies that offer free maintenance for a brief time, normally you’re charged with a yearly or monthly fee which might differ from developer to developer.

There are no charges for bug-fixes and small modifications in the existing app version. However, if you want to add new features or have the app redesigned, you’ll have to pay an extra fee.

Now that you’ve got a clue of how the app cost is decided, you can better tell whether or not you’re paying too much for your app.

However, I don’t want to rely on these details alone. Without practical implementation, they’re of no use.

A few tactics that you can try:

You can’t tell if you’re being overcharged or not – unless you compare the rates of various app developers.

For this, you’ll have to get in touch with various app development firms, ask for their price quotes, and see the differences.

Business listing websites like Clutch, AppFutura, and Business of Apps are yet another great alternatives.

Here, you can find just about every detail about your potential app developers, such as basic information, hourly rates, minimum budget, etc. So, make sure you check here as well.

There are also many websites that give users an idea of how much an app can cost.

The process is very simple.

Just enter basic details, answer some simple questions, and submit. Within a few seconds, you’ll get a reasonable estimate.

I know about one such handy cost estimation website. You can try it.

Most people are conned by app developers because they’re not informed.

Once you’re up-to-date, no one will dare to trick you to pay more than the budget.

Also, being aware is not that much hard these days. We have the Internet and access to ultra-modern technology.

Well brief yourself and be safe.